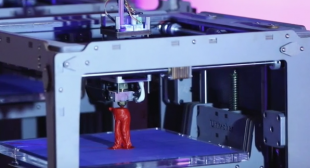 As its name suggests, a 3D printer prints ink not on a flat substrate, such as paper, but in three dimensions, in successive layers; the ink is substrate and substance in one. The first 3-D printers were developed in the nineteen-eighties, by an American engineer named Charles Hull. The “ink” was an acrylic liquid that turned solid when exposed to ultraviolet light, typically from a laser beam. Makers of cars and airplanes could design complicated parts on a computer and then print out prototypes for manufacture; now they often print the part, too. Three-dimensional printers have become inexpensive and ubiquitous.

In the United States, debates have erupted over whether citizens should be allowed to 3D-print handguns at home, which the technology makes possible. Today’s printers print in plastics, and also in silver, gold, and other metals, along with ceramics, wax, and even food. (NASA is working on a zero-gravity 3D printer that can make pizza for orbiting astronauts.)